Progressive Web App- The Best Guide On The Internet

This guide defines progressive web apps, their benefits & features, the best PWA platforms, SEO perks, and many more. Let’s find out everything about PWA.

What are progressive web apps (PWAs)?

Progressive web apps (PWAs) are web applications that are designed to give a native app experience on the website with the help of service workers and web manifests. PWAs take advantage of the best of both worlds, websites and apps. You can visit web apps faster than installing an application and get an app-like seamless experience on the website.

These web apps use only web technologies to look like a website and behave like a mobile app. You can enjoy the app experience without visiting the app store, downloading and installing the application, and buying any subscription. PWAs can easily be added to the home screen.

Who builds a progressive web app?

What are the benefits of Progressive Web Apps?

Progressive web apps have many benefits for users, businesses, and developers simultaneously.

What are the benefits of progressive web apps for users?

What are the benefits of progressive web apps for merchants?

What are the benefits of progressive web apps for developers?

We have covered a far more detailed piece on the benefits of PWA. You’d like to check them for two reasons— conversion rate and PWA for mobile commerce.

Traffic, engagement, and interactions are fine. But do PWA stores convert? Well, yes! The conversion rate for PWA varies from industry to industry. But Google Developer speculates PWA increases the average conversion rate by at least 50%. Some industries may experience doubling their conversion.

Here are some famous companies with their ROI figures. 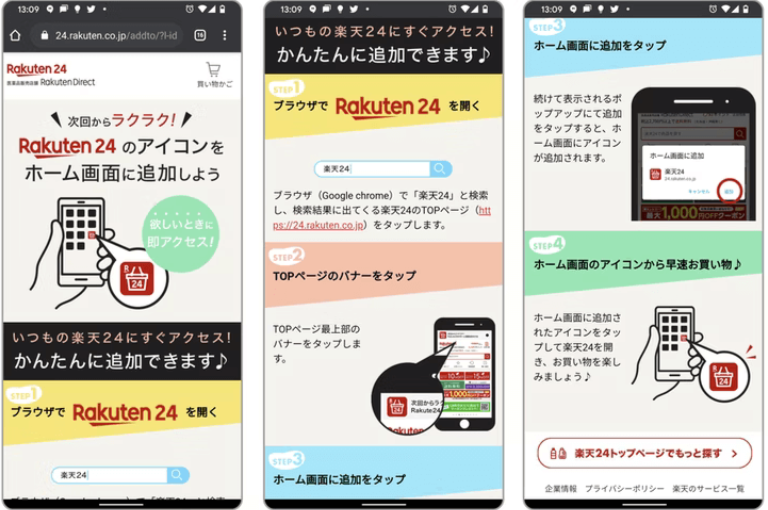 You can learn more about how PWA helps with conversion optimization, increases overall revenue, and affects marketing operations for any business.

The m-commerce revenue continues to surge in the United States [5] and may surpass the $700bn mark by 2025. As mobile commerce grows, users will continue to expect a far better experience on their mobile devices.

As PWA is one of the promising solutions to build a seamless experience for the users, there’s no doubt the future of PWA for eCommerce can be enjoyable to watch. We have covered some successful brands that executed mCommerce PWA to perfection. Seems like PWA mCommerce is already present with brands like Alibaba, Twitter, and Walmart.

What are the features of a progressive web app?

The main features of a PWA:

Some advanced features of PWA

With the help of credential management APIs, PWA auto-fills the sign-up details for the users. Browsers for PWA save credentials to save time for quick fill-ups and early logins.

Payment management API fastens the checkout process for PWA users as the web app gets the unique ability to fill the payment details automatically. Users also get to select their favorite payment process at the payment gateway.

What are progressive web apps for Magento?

Progressive web apps for Magento or PWA Magento are web app stores built on Magento. The store may or may not be a headless store. If PWA Magento is headless, Magento is used in the backend, and third-party solutions like Vue Storefront, Shogun, etc., are used at the frontend. The Magento store can still be non-headless commerce and PWA simultaneously.

The idea of PWA Magento is to fasten the slow default Magento store.

We have covered in great depth how PWA makes Magento more powerful. The interesting thing to watch out for is, that you don’t need to stick to old Luma or any Magento theme to build your store.

Frontend solutions like Hyva and Vue Storefront build fast experience. The other thing is Magento commerce has its frontend toolkit called Magento PWA studio. The toolkit lets developers use:

What is the PWA development service for Magento?

PWA development service for Magento is the process of developing and deploying PWA Magento stores. These stores are either designed by Magento PWA development companies or freelancers. The steps include discovery, wireframing, development, deployment, training, and maintaining the Magento Store.

What are progressive web apps for Shopify?

Progressive web apps for Shopify or PWA Shopify are web app stores built on Shopify. Shopify PWA may or may not be headless. To build headless PWA Shopify, businesses use frontend solutions such as Vue Storefront and Shogun, wherein Shopify provides the backend. Shopify also offers a PWA solution with its Hydrogen frontend, which is a different solution from its traditional frontend solution.

UNLIKE THE MONOLITHIC ARCHITECTURE, headless PWA stores have separated backend and frontend. With headless PWA Shopify, merchants get the power to ditch the traditional Shopify frontend and make their marketing and development processes independent of each other.

The other thing is- Shopify gives you the headless PWA experience with the Hydrogen framework. Businesses can

What is the PWA development service for Shopify?

PWA development service for Shopify is the service offered by headless Shopify companies to build, test, deploy, and maintain the PWA Shopify store. Shopify merchants buy PWA Shopify services from agencies or freelancers to customize and fasten their stores.

In Shopify PWA services, a merchant may choose a headless or traditional store as per their need. To hire PWA development services,

What is PWA iOS?

PWA iOS is a process of building web apps compatible with iOS devices. These web apps give a seamless user experience to Apple users. Apple jumped into the progressive web app space much later than Google. But it is getting into space faster than ever.

What is headless PWA?

Headless PWA separates content management applications and content delivery applications for PWA stores. It’s just an extended version of PWA where merchants have separate control over the front and back end.

Headless PWA lets merchants decouple both ends to get better design control without reimplementing anything on the content side.

Sometimes the list of headless commerce isn’t reasonably sufficient to pick headless PWA frontends for your business. We found that Magento-based merchants had a hard time choosing their frontends for three reasons.

Additionally, there are different nuances to each platform. Some frontend is better for SEO than others. Some have a better toolkit than others. Many factors differentiate one front end from the other.

So we created a small comparison review between Magento PWA studio and Vue Storefront for the merchants to decide what works the best for them. We considered multiple factors to compare the two frontends, and we’re looking to cover a lot more of them in the future.

Since a progressive web app is a relatively new technology, is it SEO-friendly? Well, there’s no direct effect of PWA on SEO. But then, PWA enhances all the signals that contribute to store ranking.

SEO experts don’t have to do anything out of the box to execute SEO for PWA. SEO processes are more or less the same as traditional eCommerce stores. They have to:

We talked about indexing and crawling practices for PWA in one of our articles on SEO for PWA. The guideline will help merchants get all of their pages crawled and indexed by search engines. Plus, they will get answers to all essential questions on optimizing PWA stores and their myths.

Some of the biggest brands have successfully implemented PWA and have noticed an increase in traffic, engagement, and conversion. We covered PWA examples in depth, where many brands improved their positions in the market with web apps. Some of them were:

But these are not the only business types that have adopted web apps. Many media giants have also worked around PWAs, especially Forbes and The Washington Post. You may ask if the media industry must go for PWA when there’s no product to convert.

So no specific business type has a monopoly over PWA. Every type can accommodate PWA in their use case to improve the user experience.

How are the backend and third-party frontend connected in PWA?

You still need a connection for data to flow and reflect from one end to the other. And there are very few viable connecting solutions in the industry as Aureate Lab’s PWA connector.

The connector connects Shopify with third-party frontends such as Vue Storefront. In fact, you can save thousands of dollars in customization with the connector.

What are the benefits of a PWA connector?

No connector = No way to make backend and frontend work together

So connector exists to produce all the benefits PWA produces.

A connector is essential for building headless stores; we have touched Shopify-Vue storefront connector’s installation and configuration in detail.

Some frequently asked queries regarding PWA.

Can a PWA be an app?

Yes, a PWA can be an app. The full-form progressive “web” “app” is self-explanatory as it’s both a mobile app and a website. You can use PWA as a website on desktop and mobile browsers and also like an app on mobile and tablet devices. Since PWA gives an app-like experience, you don’t have to build a separate native app for your store.

Yes. PWA improves site performance by 43% on average than their browser counter-part website. Most PWAs load within 1 second, whereas a regular website may take 2 to 20 seconds to render and be visible to the users. You can improve PWA performance by prioritizing resources and using the cache-first network.

Who is PWA good for?

PWA is good for customers with flaky network connections, rural markets with unstable internet coverage, & surfers with low data packs. PWA is also good for eCommerce merchants who want to offer a fast browsing experience to their users and make more fortune out of it.

Yes! PWA is good for websites with large product SKUs and tens of thousands of pages. Large eCommerce stores usually slow down the user experience. PWA is a suitable choice to speed up such stores with large databases.

Yes and no. PWA is both a headless and non-headless commerce. You can build PWA with or without headless technology. Merchants prefer headless PWA commerce for independent control over the front and back end.

Is PWA better than native apps?

View All Blog View All

How to install PWA to your device? Next
we forecast

We don’t write crap content which is uninteresting, found everywhere and does not make any sense. Following our DNA, we write and speak about next generation technology, platforms and possibilities of digital commerce.

Progressive Web Apps: The future of the Mobile Web

How PWA can help you in increasing conversion rates?